Wargames Through the Looking Glass 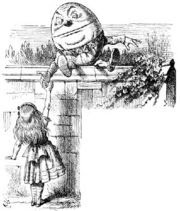 I’ve finally cracked how the Flames of War flexible groundscale works. With a bit of help from Lewis Carroll.

‘When I make a measurement playing Flames of War,’ Humpty Dumpty said, in a rather scornful tone,’ it represents just what distance I choose it to in real life, neither more nor less.’

‘The question is,’ said Alice, ‘whether you can make similar measurements on the table represent so many different distances in real life.’

‘The question is,’ said Humpty Dumpty, ‘which is to be master – that’s all.’

Alice was too much puzzled to say anything; so after a minute Humpty Dumpty began again. ‘They’ve a temper, some of them – particularly weapon ranges, they’re the proudest – movement rates you can do anything with, but not frontages – however, I can manage the whole lot of them! Impenetrability! That’s what I say!’